A new perspective hypothesis termed “Stellar Transformer” proposes “electromagnetic” energy between celestial objects be considered much like the induction transformer process that steps down household energy from the power company. For example, the Sun represents a large coil from the power company, while the Earth represents the smaller coil to the home.  The larger coil element generally excites current into the smaller coil element by introducing “step-down energy.”

The Predictive Earth Digital Twin can provide a continuously learning system that uses AI and machine learning algorithms to capture and predict changes in state and configuration of larger solar systems affecting the earth-sun induction processes of the Stellar Transformer.

Predictive Earth Digital Twin models epitomize the convergence of Information Technology (IT) and Operational Technology (OT). Orbiting satellites and related terrestrial sensors represent the OT side, while virtualized aspects of the digital twin represent the IT side. The OT real-world entities are effectively listening and capturing critical data for real-time analysis. These entities provide key sources of data that are captured in real-time and synchronized to virtual representation(s) at a given frequency and level of fidelity that was not achievable in the past. 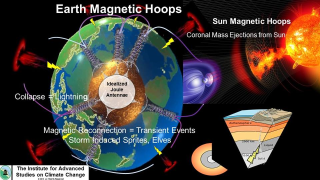 This convergence of IT and OT plays at the heart of the industrial internet, where AI and ML are applied, among other technologies, to gain both predictive and prescriptive actionable insight.  Causally linking events at specific geographical locations to observed solar phenomena is key.  Consequently, utilizing a Digital Twin offers a considerable advantage in predictive power at the local level.

As stated earlier, the concept is understood as simple step-down energy between Sun and Earth, much like the transformer process that steps down household energy from the power company.  The Sun represents a large coil from the power company, while the Earth represents the smaller coil to the home. The larger coil element generally excites current into the smaller coil element by introducing “step-down energy.”

This concept is exploited for global disaster forecasting using a digital twin approach for improving the predictive power of existing and developing coupled forecast models.  This multifaceted approach applies to industrial internet infrastructure concerns and beyond to Space Mission awareness issues surrounding control and command.

Digital twins are formal digital representations of entities and have three parts: physical, virtual, and connections. In 2012, the National Aeronautics and Space Administration (NASA) defined it as “a multi-physics, multiscale, probabilistic, ultra-fidelity simulation that reflects, promptly, the state of a corresponding twin based on the historical data, real-time sensor data, and physical model,” and “Digital representation, sufficient to meet the requirements of a set of use cases.”  Digital representation is defined as “Information that represents attributes and behaviors of an entity.”

Serviceable attributes interactively interface with computational, geometrical, visualization, and other models and must have adequate communication, storage, interpretation, process, and analysis of data the entity monitors.  It is used to predict its states and behaviors within global disaster management and space mission scenarios.

This is only a preview. Your comment has not yet been posted.

The letters and numbers you entered did not match the image. Please try again.

As a final step before posting your comment, enter the letters and numbers you see in the image below. This prevents automated programs from posting comments.

Having trouble reading this image? View an alternate.

Comments are moderated, and will not appear until the author has approved them.

(Name and email address are required. Email address will not be displayed with the comment.)